The Vouraikos delta (Fig. 1) is the largest of the Lower to Middle Pleistocene deltas with a radius of 4 km, a minimum thickness of 800 m, a surface area of 25 km2 and an estimated volume of 12.6 km3. The delta was deposited in the centre of the Pirgaki-Mamoussia fault block where the estimated throw on the PM fault is over 1500 m. It is incised by its own river that has also incised the pre-rift carbonates in its footwall to create the spectacular Vouraikos gorge through which a small mountain railway runs between Diakofto to Kalavrita. The delta has been uplifted since about 700 ka in the footwall of the Helike Fault, which cut through the front of the delta. Since that time, the Vouraikos river has been building the Diakofto delta out into the present Gulf in the hangingwall of the Helike fault. Displacement on this fault is estimated to be between 3.5 and 6 km (McNeill et al. 2004), implying that it is a far larger fault than older faults to the south. This sequence of events has led to the widely held belief that across the whole rift fault activity migrated northward with time. Due to uplift and incision of three rivers, the Vouraikos delta is exceptionally well exposed in three N-S sections (Fig.4) and two full E-W sections. We can therefore obtain a very good idea of its 3D geometry. 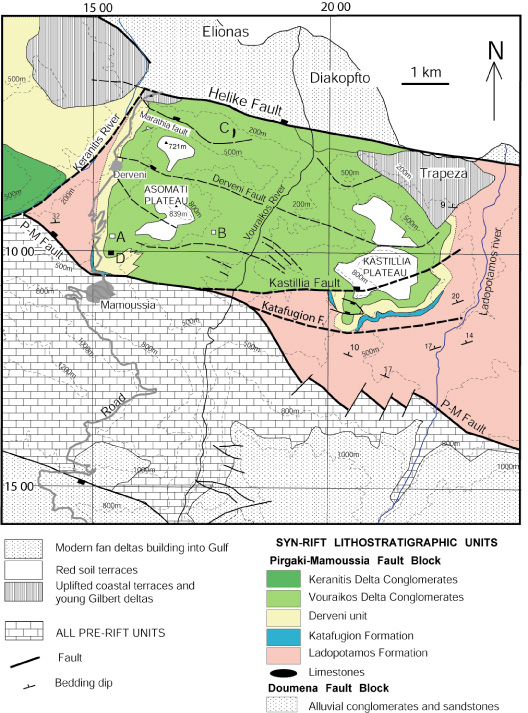 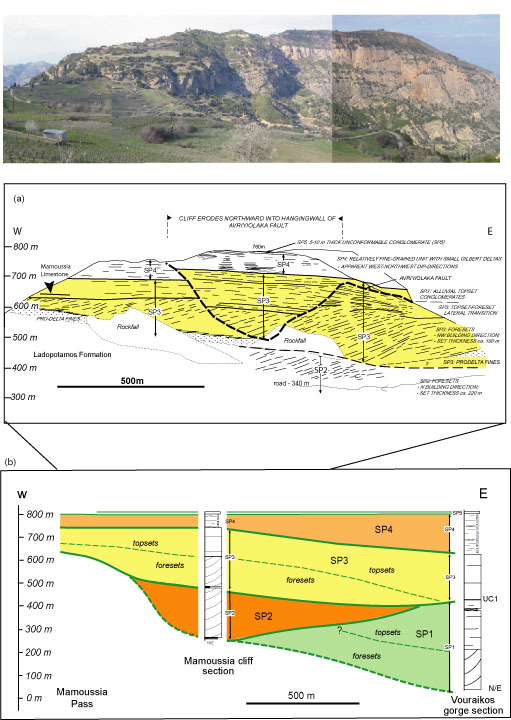 Figure 2. The E-W Mamoussia cliff at the SW edge of the Vouraikos Gilbert delta, showing the gradual infill of a palaeo-valley.

The delta shows a near perfect radial fan of foreset dips (Fig.3a) recording progradation toward the NNW (345°). This symmetry suggest that the Vouraikos delta had a fixed point sediment supply from the footwall throughout its history and that this was the same river that is now incising into it (Type A feeder system of Postma, 1990, 1995).

The delta built into a marine basin.

An algal limestone bed (Fig 3b) forms a step at the gate to the ancient city of Keryneia (located in Figure 2b). Along with another bioclastic limestone found on the delta front, this limestone facies indicates that the delta built into a marine basin (Ford et al., 2007). 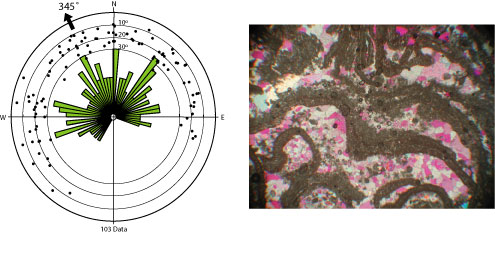 Figure 3 (a) Rose diagram and polar plot of dip and dip directions of 104 foresets of the Vouraikos delta showing average direction of 345°N. (b) Photomicrograph (5 mm across) of Mamoussia limestone bed (located in Figure 33b), showing algal mat texture (Ford et al. 2007).

The delta infilled a palaeovalley.

The delta is divided into five stratal packages (SP1 to SP5, figs 4 and 5). The lowest part of the delta (SP1) is exposed in the Vouraikos gorge, which cuts through the centre of the delta. The base is not exposed and thus lies below 100 m elevation. To the east and west of the gorge the base of the delta rises gradually to an elevation of 500m (Figs. 2 and 3) Reconstruction of the delta’s internal stratal architecture shows that it gradually infilled a N-S palaeovalley some 7-8 km across and at least 300 m deep. The paleovalley records a major unconformity between the Lower and Middle Groups in the western Gulf. It is estimated that it would take 100-300 ka to erode this valley subaerially. Further west, the Kerinitis delta also infills a similar paleotopography(Backert 2009). The gradual infilling of this palaeovalley can also be appreciated by comparing the N-S cross sections through the centre (deepest valley and showing the most complete delta stratigraphy ) and west of the delta (valley fringe, only youngest stratal units reached here; Fig.4)

Figure 4. Longitudinal section through the south of the L-M Pleistocene Vouraikos delta showing how it infilled a palaeovalley incised into the fluvial succession of the Lower group (adapted from Ford et al. 2007).

The delta is divided into five stratal units (SP 1 to 5, Figs 2, 4, 5). SP1 records a strongly progradational phase of early delta growth that is associated with aggradational topsets (dominantly fluvial but with rare coastal facies). Note the rollover anticline and tilted blocks at the southern end of the delta in SP1. SP2 is a small delta package found only on the SW side of the delta. It overlies an erosion surface which records a major landward shift in delta construction. SP3 is a strongly aggradation-progradation phase with evidence of intra-delta fault activity. SP4 also records strong progradation with bypass surfaces (although the front of the delta is missing, cut by the Helike fault), but still associated with aggradation. SP4 topsets are sandier and contain many small stacked packages of foresets recording frequent flooding of the delta top. SP5 is a thin unit of shallow marine facies that covered the top of the delta. We interpret this as representing the death of the Mamoussia fault.

The stratal architecture of the Vouraikos delta is dominated by units that are both strongly aggradational and progradational. We interpret this as due to the strong subsidence at the centre of the PM fault system. Nevertheless, the same pattern of delta construction can be detected with early strong progradation, giving way to strong aggradation. These can be interpreted as representing early and main fault growth phases.